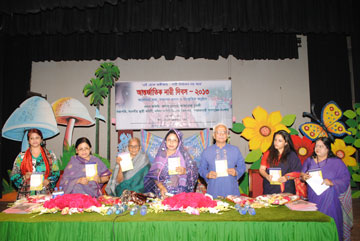 National Girl Child Advocacy Forum and The Hunger Project Bangladesh have jointly observed International Women Day 2013 at more than 400 places throughout Bangladesh. A central event organized in Dhaka followed by a huge rally, discussion meeting andaward giving ceremony. The rally was inaugurated by Meher Afroj Chumki, MP and President of the Parliamentary Standing Committee for Ministry of Women and Child Affairs. About 1000 women, men and children of 19 organizations joined the rally. The rally started from Teacher-Student Center of Dhaka University and end at Shisu Academy (National Child Academy) .

Another personnel is Sara Afreen, an architect and filmmaker. Amongst a handful of young upcoming Women Producers from Bangladesh, Sara is the first Bangladeshi to be graduated from European Audio Visual Entrepreneurs (EAVE) and was awarded with full scholarships from European Commission’s Media Program Fund (Media Mundus) and France’s National Center of Cinematography and the moving image (CNC).
Since Aila hit in 2009, a young mother with her jobless husband and a small community was living stranded in a village by Sundarbans. They have been living on an age-old dyke waiting with a hope to get back their lost land. She as a Filmmaker, falls in love and decides to make a film. In contrary of taking a shortcut with pity, she shoots them on a 20 months stretch on and off. She waits until their wait ends, and they win back the land. Instead of exploiting their vulnerability, she finds out their strength and love for life. She frames their celebration of life as, ‘Shunte Ki Pao!’ Acknowledging the powerful resilience of the people and the film, world’s oldest documentary festival Dok Leipzig, for the first time ever from Bangladesh, invites ‘Shunte Ki Pao!’ to open its 55th edition held in Germany in 2012. Later in the same year, the film made it to the official selection of the world’s largest documentary festival IDFA in Amsterdam on its silver jubilee edition.

Meher Afroj Chumki M.P and President of Parliamentary Standing Committee for the ministry of Women and Child Affairs is opening the rally.

Opening of ‘Narir Kotha’ a book based on success stories of women leaders.

Linu is addressing the audience.

Sara is addressing the audience.